BMW developed and used a few part number systems over the years since the companies original founding. We have incorporated three of these number systems in our online catalogue and have endeavored to explain these systems in this chapter so that you, our customer, may acquire a better understanding of these part numbers when ordering parts for your BMW motorcycle.

Our company does not publish an own catalogue, as there are just far too many parts, too many models and too many eras to put to print. Almost all of the original BMW parts catalogues published are still available either in originals or in reproduction format.

These original parts catalogues are the "Bible" for every BMW motorcycle owner. They contain exploded diagrams of parts, descriptions, model allocation and quantities in matrix form. Of course the original BMW part numbers are the key to any part identification, especially when ordering and purchasing parts, irrespective of which dealer you choose. If you do not have an original BMW parts catalogue for your model, you can order them from our company via our on-line shop by searching under the product category "01.0 BMW Literature" 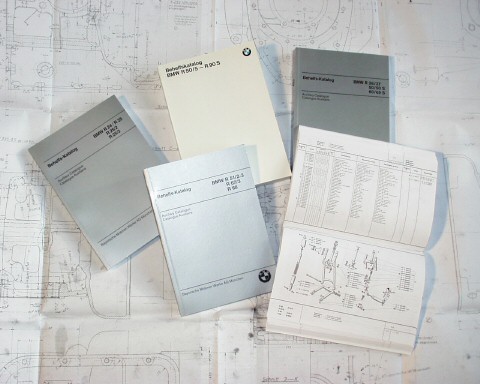 The most important part number system is the current system consisting of 11 digits.

1. 11 digit present part numbers.
The present spare parts catalogues from BMW is divided by registers into main groups and within the latter into sub groups.

The listing of the part numbers is in an ascending sequence.

The BMW part number, being the ordering number, consists of 11 digits with 3 subdivisions.

A full list of categories can be seen in a pull down menu "Category" in the on-line shop.

The original BMW parts catalogue editions pre 1964 only contain 7 digit part numbers. If you are using such a parts catalogue, you can enter the old 7-digit number in the search engine of our on-line shop, and the new 11-digit number will automatically be displayed (If it is in our data bank). We also still have original old stock of the BMW 7 to 11 digit conversion books. The part number of this book is 01 00 9 796 023.

3. 10 digit prewar part numbers.
In 1934, BMW introduced a new structured part number system, which was used until 1954. In my opinion, this was the most sensible and logical part number system that BMW ever had. An example of such a number is as follows:

We have endeavored to include as many obsolete part numbers in our databank as possible. It takes a tremendous amount of time, knowledge, research and effort to include all parts including obsolete and replaced part numbers in our data bank which slowly and steadily grows when we have the time to do so. Many pre war numbers have been replaced with new 11 digit post war numbers, as the part is identical as that in a post war BMW model.

If you are searching for a BMW part and cannot find it in our databank, then please ask us by phone, fax or e-mail.